Super Bowl Sunday is coming this weekend – February 2nd, 2014. The Seattle Seahawks and Denver Broncos will be playing for the 2014 title and trophy. 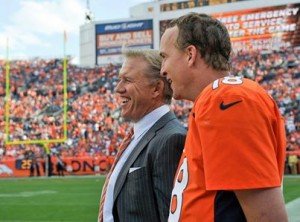 Football frenzy is happening this week in preparation for Super Bowl XLVIII on Sunday. Denver has a special celebration each day this week, the Broncos and Seahawks are in Greater New York practising for the game.

Many of you know me as a Die Hard Green Bay Packer Fan. After learning the game of football from Vince Lombardi in the last World Championship win in 1966 and the first 2 Super Bowl wins in 1967 and 1968, it is impossible to switch allegiance. However, Broncoland is my home now; so I’ll be embracing the Broncos this Sunday. The awesome story of Peyton Manning’s “return” to the game after his injuries, is an amazing feat. We are all proud to have him as part of the Denver Broncos and wish him luck on Sunday. The Elway-Manning team has had a great winning season, rewarding the Broncos the AFC Championship.

Whether you’re going to a Super Bowl party or hosting one, your goodies will be ready for your parties. Your company will have arrived, it’ll be time to sit down to enjoy the game and the commercial breaks. Your friends and our readers will be wearing their team colors. It will be a great game and time for the culmination of the 2013 Football Season. Holiday atmosphere prevails.

Many of you have window treatments which include blinds and draperies as part of your rooms. Some of you have Silhouette® window shadings: a type of “blind” which has sheers on the front and back of a vane suspended between them. The benefits of this type of shading are great. Readers enjoy a filtered view, some privacy and insulation when the shading is covering the glass and used with the vanes in the open position. Because of those benefits, many of you have them or similar Hunter Douglas products, such as Nantuckets™, Luminettes®, Pirouettes®, Vignettes® and Soleras™, in your homes. Other manufacturers make Illusions and Shangri-Las that give similar effects.

The Silhouettes®, Nantuckets™, Pirouettes® and Soleras™ in particular, have the ability to provide iridescent lighting in your homes, a huge attraction for our readers. When the blinds have been hanging for awhile, they often will collect bugs and debris, as the insects are drawn into the side openings of the shadings because of the life giving energy of light,  and cannot get out.

In my long time Design practice, I have sold thousands of those products, and invented a solution to Sticky Bug Removal. It is the CamilyWand™ Sticky Bug Removal Tool™, which is composed of a perpetually sticky CamilyTip and extension pole. It is a marvelous, easy way to remove bugs or debris from blinds and other hard to reach, high and inaccessible places. I find that it is important to have it readily available in my home, as I never know when a bug will get into the shading, and it should be removed as soon as possible. So it is good for you and your friends to have the CamilyWand™ on hand, to use as needed—

We at Camily, LLC hope you have a wonderful Super Bowl weekend, are safe and happy!