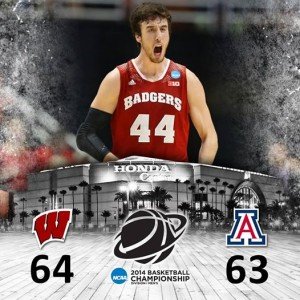 As a UW Grad and diehard anything Wisconsin fan, its been a joy to watch all of the games with these great, talented players, especially Frank Kaminsky, III.

I was intrigued to learn about his and the teams thoughts regarding the  games and how they translated into life and business. Frank scored 28 points in the Elite Eight game against Arizona on Saturday, March 29. That included 6 in overtime. The win was 64 Badgers vs 63 for Arizona. During the on court interview he talked about playing every minute and point to the best of his ability. Wisconsin now has another 40 minutes this weekend for a berth in the Semi-Finals of the NCAA 2014 Basketball Championships. Frank was thrilled to get another chance at the final win.

During his speech in Anaheim on Saturday, he said ” We’ve all played basketball our whole lives and we’ve all dreamed of going to the Final Four…To actually accomplish that is something I can’t put into words. But we all know we still have a lot of basketball left. We’re going to enjoy this now, but this is business. We want a national championship now. We have made the Final Four, so why not go get it?”

What did they do? They LIVED IN THE MOMENT, they KEPT FOCUSED, they are REALIZING THEIR DREAMS!

These habits are ingrained in the minds of many successful business people. We operate that way at CamilyWand™. Our CamilyWand™ Sticky Bug Removal Tool™ is developed to solve a problem for millions of homeowners who have Hunter Douglas Window shadings, such as Silhouettes®, Nantuckets™, Pirouettes®, Luminettes®, Soleras™, and Vignettes® in their homes. Over time, they collect bugs and debris. We invented and market the tool to solve those issues and preserve the readers views and shading investments.

We at Camily, LLC hope you will note some of the habits of successful people and enjoy your time relaxing with sports or other endeavors this weekend.